Dinner in Salt Lake City with the Utah A&M Club 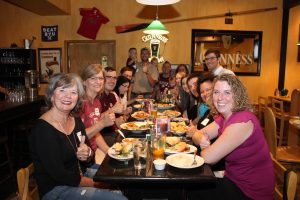 Aggies from the Classes of 1967 to 2014 came out for the Texas A&M Club of Utah’s Sept. 6 fall Kickoff Dinner, which The Association of Former Students attended on its Coast to Coast tour of 50 A&M Clubs.

We met at MacCool’s Public House, which is where the Club will hold watch parties for this season’s football games vs. Arkansas, Alabama and Auburn (see tx.ag/watchparties for details). Officers are also working on having events in several locations around the city to be more accessible to members.

The Club has also come together for events such as a summer picnic and attending Salt Lake City Bees baseball games.

They’ve had as many as 80 attend Muster, and usually average around 45 in attendance. This year’s Muster was held at a local restaurant and featured a taco bar buffet.