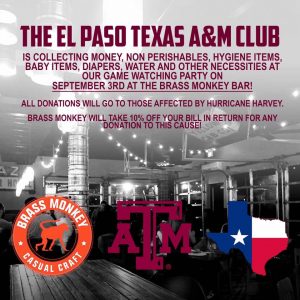 The El Paso A&M Club has turned its Sunday gamewatch party into a fundraiser for Harvey relief, collecting supplies and also monetary donations, with the Brass Monkey bar offering discounts for those who donate.

Aggie football gamewatch parties are well-attended in El Paso. Thirty to 40 Aggies may come out, and the events are usually held at Aggie-owned bars.

“We build everything around the football schedule,” says Richard Bransford ’79, the Club’s vice president. He also chaired the Club’s inaugural golf tournament, which raised more than $7,600 for scholarships in 2016: “The El Paso Club has three endowed scholarships, and that’s working toward a fourth,” he says. This year’s golf tournament is already planned for Nov. 11. 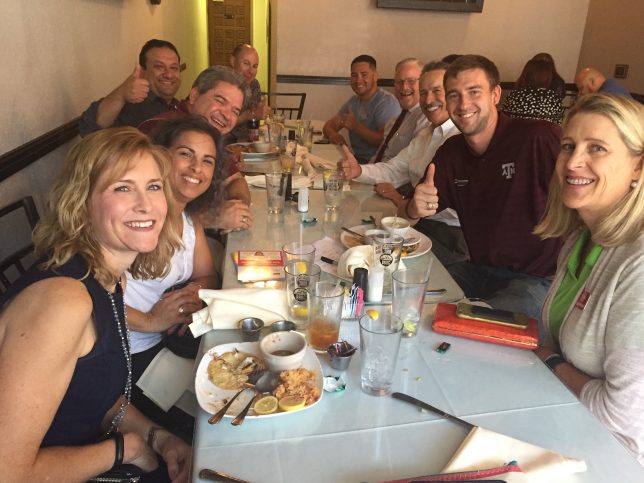 Jessica Lopez ’88 says she works to help send El Paso students to A&M “so they can experience what I experienced. I loved A&M, and I’d go back to A&M today if I could.” She’s been the Club’s secretary and treasurer for two years, has served on fundraising committees and written the newsletter.

“We’re really far away from A&M, obviously, while still being in Texas, and those of us who are older remember going to A&M when it was like, ‘Hey, there’s three of us here from A&M.’

“It’s far away, but we don’t want it to feel emotionally far.”

The Club bridges that 680-mile gap, she says, by bringing the language, the sounds and the experiences of Aggieland to El Paso.

“We try to do the same things that you would do at A&M,” Jessica says. “We’ve had yell leaders who are part of the club, and certainly for gameday that brings it all back.”

She pays attention to details like getting the right shade of maroon for the sponsor flags at the golf tournament and using Aggie traditions for the sponsorship levels’ names — even if it might be easier to ask a Longhorn business owner in El Paso to donate if it weren’t called “Reveille level.” 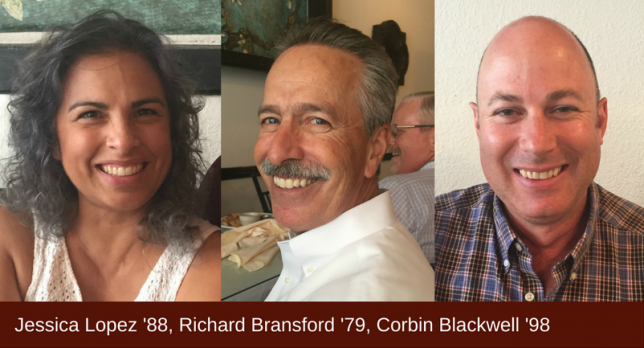 And the Aggie family is growing here. “We have a lot of parents in the Club now, and there’s an Aggie Moms Club here,” she says.

The Club’s biggest event of the year is Muster. This year’s was held atop a downtown building at the El Paso Club, with a view out toward the mountains.

“There’s a good core of Aggies here,” says Corbin Blackwell ’98, but also a lot of Aggies passing through — it’s a region with a mobile population, including military, who are here for several years and then move onward. Nearby Fort Bliss is the second largest Army post in the country (with its training area, the largest).

Corbin, who’s served the Club in various officer capacities in recent years, says they post on social media hoping to reach these Aggies, and also that if a military member or other Aggie moving to town updates their physical address with The Association at AggieNetwork.com/profile. Then, Corbin says, the Club will add their email address to reach out to them (assuming that’s also updated in the Association database; Corbin says about 80% of the time, there is an email associated with the names they receive).