Jacksonville is the largest city in the U.S. by square mileage, said Roland Larino ’12, president of the Northeast Florida A&M Club.

“Last year’s Muster, some people had to drive an hour to get there,” he said.

Larino, who chaired that Muster, said the Club tries to host a variety of events such as football gamewatching parties in different locations, “so that we’re not favoring one side of the city.“ 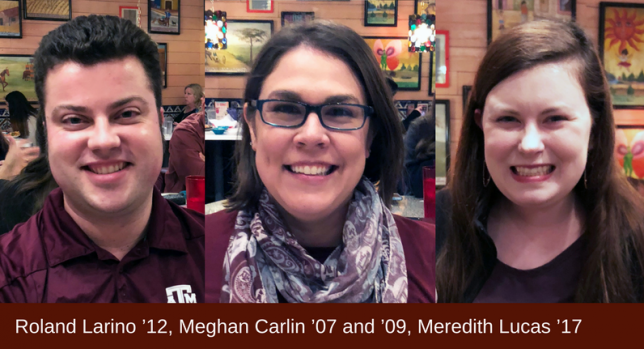 “There’s more Aggies than you think here,” he said. “We get requests to join the (Facebook) group all the time. They reach out. That’s what I did — found them on Facebook.”

Muster typically draws 50 to 70 attendees. Families with kids and Aggies from the nearby naval bases are part of the Club’s mix, said Larino and previous acting president Meghan Carlin ’07 and ’09. The Club plans happy hours, a summer family event at a park — “I want to do more,” Larino said.

“We have a double-A team here, the Jacksonville Jumbo Shrimp. We had a night out there.”

Meredith Lucas ’17 enjoyed going to baseball with the Club: “Because minor league baseball, they don’t take themselves seriously. I mean, it’s the Jumbo Shrimp. It was fun!”

Lucas went to her first Northeast Florida A&M Club event just before she graduated from A&M in August with a degree in marketing. A Jacksonville native, she got connected with the Club via its Facebook page.

Joan Vanderbilt ’80 is a longtime Club member who used to handle the Club’s email communications.

Over the years, she said, “We’ve had Muster in our backyard, a country club, different restaurants, in a park, at a beach, in a brewery…” One memorable Muster in the late 1990s, she said, was an afternoon cookout on a small island, where the Aggies picnicked at a covered pavilion and took a group photo with the sea and sand dunes in the background.

This year, the Northeast Florida Aggies rode a ferry to Muster, she said.

It was held at the Sandollar restaurant on a deck overlooking the Intracoastal Waterway.

Larino said, “We had a problem with the sea breeze off the Intracoastal, keeping the candles lit. If I’d thought about it, I would have used battery candles so at least they wouldn’t go out.” 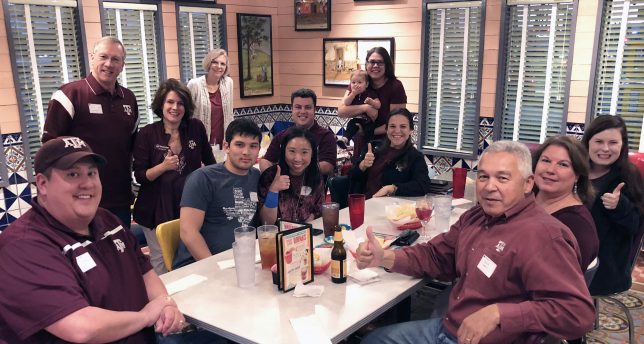 The Northeast Florida Aggies met us for dinner at a Chuy’s in Jacksonville.