Aggies stood on the Embarcadero in San Diego on Aug. 31 and watched one of their own soar above the USS Midway in an F/A-18 Super Hornet — the same Aggie pilot who will lead tomorrow’s flyover at the Rose Bowl before the A&M/UCLA game.

The San Diego County A&M Club welcomed The Association’s Coast to Coast tour to California with a happy hour on Broadway Pier and held a quick yell practice, featuring “Beat The Hell Out Of Harvey,” before the flyover by Club member and U.S. Navy commander Chris Edwards ’01.

Technically, the flyover was part of the Midway gala being held at the start of Fleet Week, but we think the Aggies on the pier whooped louder than the gala guests.

The happy hour came together very quickly. “We’re very agile as a Club. This event just popped up, and using social media and our email list, we were able to get 40 people here, including people I’ve never met before,” said Ed Weisbrod ’87. 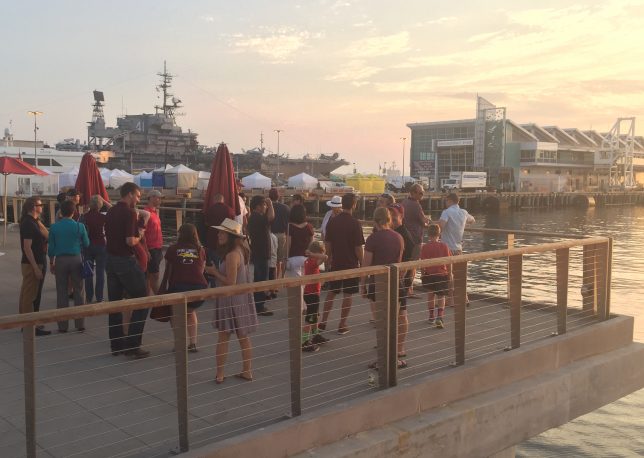 Ed is the Club’s Muster chair and has been a Club member since 1989 when he arrived in the area via the U.S. Navy. Since he retired from the Navy in 2010, he’s been able to serve as a more active member of the Club, including being president for three years.

Muster is the Club’s largest annual event, pulling 100 to 120, and Ed is already planning next year’s Muster. The Club holds watch parties for every Aggie football game and takes in other events such as an SEC alumni baseball game.

“We have so many Ags in the area that are so busy — they come to what they can,” Ed says.

Sally Toister ’94, the Club’s vice president of communications, is a native of Houston and helped organize a Harvey relief effort for the happy hour, collecting school supplies for the Houston Independent School District.

“There are quite a lot of Aggies stationed here for 3 or 4 years, and we provide them ways to do Aggie stuff.”

Though he’s one of the Club’s longest-serving active members and officers, he doesn’t have an officer title at the moment, supporting younger Ags as they take the leadership roles and develop the Club.

Serving a vast area, the Club tries to move its events around. “We try to have one at a central location, then at North County” (north San Diego), Larry says. His advice on venue selection:  “Don’t lose too much sleep over it — pick a place, then move it around, give people some options.

“You meet another Aggie and after 5 minutes, you’re old buddies. Because you know all the same stuff.” 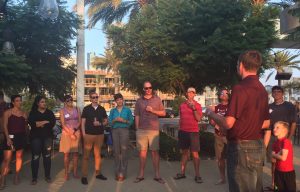