You’ve heard that not all heroes wear capes? It’s true. Jake Richter ’02 found a place that could supply 3,000 breakfast tacos for 75 cents apiece, and that’s how three Metroplex A&M Clubs fed a thousand Aggies plus friends for the All-Aggie Tailgate before Sept. 23’s victory over Arkansas.

When he’s not unloading thousands of tacos out of the back of his vehicle, Richter is a board member for the Fort Worth/Tarrant County A&M Club, a past president and “volunteer for whatever they need.”

They’ve had had a lot of success with events geared toward young Aggies, he says, citing the hard work of the Club’s vice president for young alumni, Kelli Schlicher ’10, and others.

Schlicher says the Club is looking at hosting a “pedal party,” a foot-powered way to pub-hop on a trolley with 16 seats. “You pedal it through downtown Fort Worth, and you can stop wherever you want. It’s about a 2-hour ride,” she says. 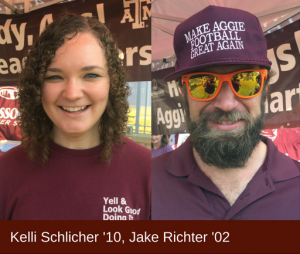 Variety of events is a key to reaching people with different interests. The Club has also met for “beer yoga” and trivia nights. When taking part in a small run like the local Oktoberfest 5K, Richter says, there’s a chance to really meet people you spot wearing an Aggie shirt and get to talking.

The Club reaches different demographics, too. Muster and Coach’s Night are huge annual get-togethers. Richter says they’ve had success reaching different groups by switching happy hours from Thursday to Friday nights: Younger Ags might not be as concerned about their ability to get up for work on Friday, but for those who are, “this lets more people come out.”

Social media helps the Club connect, and they also seek out Aggies new to the area. “The good thing is The Association will send us the addresses when they move here. Then our IT guy, Bill Condon, adds them to our database.”

The Club offers a way to connect for a common cause, he says: “It’s always easy to rally around scholarships for kids going to the motherland.” 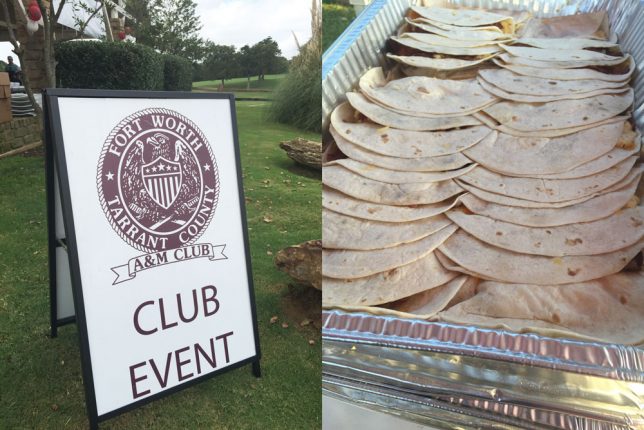 Left: The Club’s permanent sign can travel to any event, doesn’t need a post and won’t blow over. Right: For the Texas A&M vs. Arkansas tailgate, the tacos featured ham, pork sausage and bacon. #ETHOpig!