Happy Hour with the Valley of the Sun A&M Club 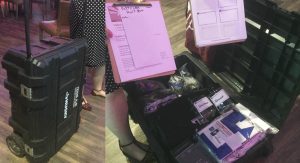 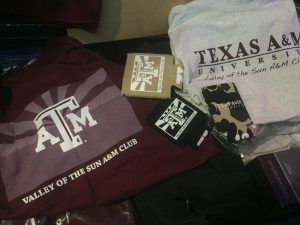 The Aggies of the Phoenix area have this game-watch party thing down to a science.

With the raffles and sales they hold during Aggie football games, the Valley of the Sun A&M Club raises enough money to provide a Maricopa County student with $1,000 per semester to attend Texas A&M.

And any member of the Club can host the whole thing, with the complete kit stored in a rolling tool chest. Merchandise and swag like Valley of the Sun A&M Club T-shirts, receipts, record-keeping — it’s all in there, and any officer or member who hosted the last event can just drop it off to whoever’s hosting the next one.

“To give officers breaks, we try to ask volunteers to host like one event,” says Ann Johnson ’08, the Club’s social chair for the past several years. It gets people involved quickly, and doesn’t require a year-long commitment. “It’s just, ‘Can you come to this game and host it? Which game do you know you’re going to be at?’” Ann says. They even get the little kids involved by getting them to pick the raffle winners.

We met up with them Aug. 30 for dinner at the Social Tap in Scottsdale, which is where their watch party will be held Sept. 3 for the UCLA game. During A&M’s first game last year, they raised $380 for their scholarship with the raffle and merchandise sales. 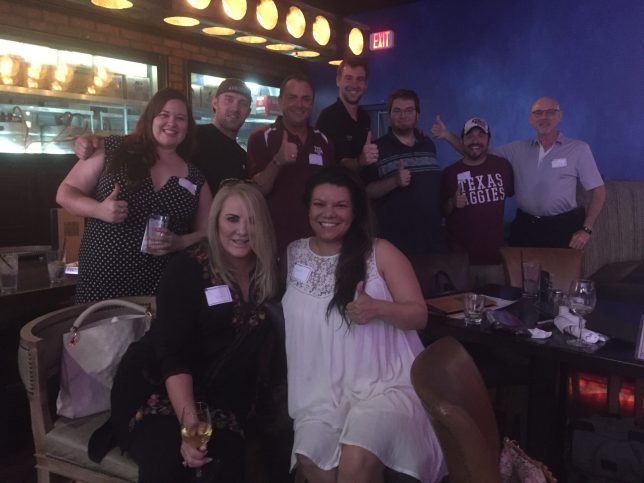 Valley of the Sun A&M Club

Sandy Ballesteros ’01 has hosted a lot of the watch parties. She says, “When I first moved to Arizona (in 2015), I didn’t know anyone, and the first thing I did was look up the A&M Club. And that has been my family.” She’d been doing recruiting and membership work for the Capital City A&M Club in Austin, and says the Phoenix-area Club made it really easy to get involved. The first event she went to was an officer meeting posted online, and she jumped right in.

Club President Brad Diemer ’92 says, “We’re very informal here. Basically, you raise your hand, you volunteer here, you’re in.” He’s been president for “the past five or six years — we’re not counting!”

The Club hosts about 85 or 90 for Musters, with its most recent Muster selling out a whole barbecue restaurant. Club game-watching events can pull 100 people.

Brad says, “The big games bring people, and the problem we have here is the weather gets good. Come October, people get busy on the weekends” with hiking, nature, golf and other outdoor pursuits.

“We have nine months here when you can’t find better weather, and who wants to be inside?”

The Club is good at what it does best. “We don’t have a big fundraiser like a golf tournament; we would need the volunteers to do that,” Brad says. “We haven’t pursued this organization to make it a big organization; we pursued it to make it a functional organization. And it functions — it brings people together.”

There are no membership fees. Ann says, “Phoenix is very transient, people moving in and out, and it makes it very hard for the Club to have a core,” as does the size of the metro area; it can take an hour to an hour and a half to get from the northwest to southeast regions. The Club tries to hold events near the center.

“One of the reasons I joined, when I first was coming to events, i felt new in town, i felt on the outside and I was so driven by not wanting others to have that experience that I got involved,” Ann says.

“I work every single event. I go around and and shake everyone’s hand and make sure that Aggie spirit is there.

“Because you know, we may all be Aggies, but some of us are shy!”