To put on Aggie festivities surrounding the Texas A&M victory over Arkansas on Sept. 23 in North Texas, The Association partnered with two of the oldest A&M Clubs and one of the newest.

The Northeast Tarrant County A&M Club was chartered by The Association in 2012 — not even the same millennium as the Dallas A&M Club (1902) and Fort Worth/Tarrant County (1931).

Even before that, it was a growing, independent Aggie group — the Northeast Tarrant Gig ‘Em Club.

Chris Williams ’95, the current president, has been active since the Gig ’Em Club days, and says its new status has made a difference. “It’s helped a lot, because before, it was very grassroots,” he says.

“Our database of names started with about 100 and grew to 300 before we got chartered.”

Through The Association, they can now send emails to more than 7,000 Aggies in the area and have access to the support and assistance that Association donors fund for A&M Clubs. 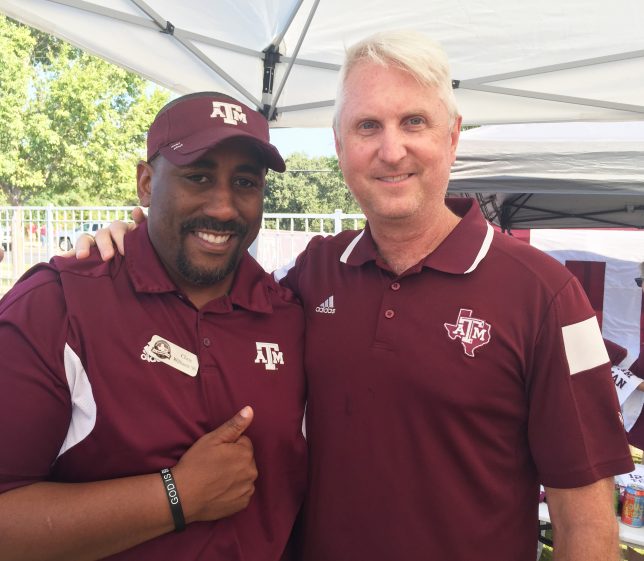 Chris Williams ’95, left, will hand off the presidency to Joel Bittick ’91 at the Club’s next Muster.

Williams got involved thanks to a workout buddy, who was a member of one of the original four Aggie families that formed the nucleus. He says he started offering help with things the Club needed, like maintaining the member list in Excel and upgrading the original website.

Tracy Miller ’88, Club treasurer and Muster chair, agrees that the email exposure is helping. The Club’s first major email went out before Muster, she said, and people were excited. “We have a lot more board members this year, a lot more people involved.”

To appeal to Aggies who are on different schedules, Miller says, they’re offering events such as a networking breakfast, lunches and happy hours. “We’re offering family-friendly events, trying to be inclusive of all ages and class years.”

Family-friendly gamewatch locations are a goal, Williams says: “We try to look for places where you can bring little future Aggies or grandparents.”

They’ve had a “trunk or treat” Halloween event, a chili cookoff and a 42 tournament.

Rachael Abell ’01, the Club’s vice president of activities, has experience from A&M Clubs in other areas. She’s been Muster chair for the South Florida A&M Club and was an active member of the San Francisco Bay Area A&M Club.

The Aggie dynamics change the farther away you get, she says. There, “seeing Shiner Bock and Blue Bell and Aggie Rings is not something you see every day. You see an Aggie sticker on I-90 and you go chase them down. Here, your next-door neighbor is an Aggie!” 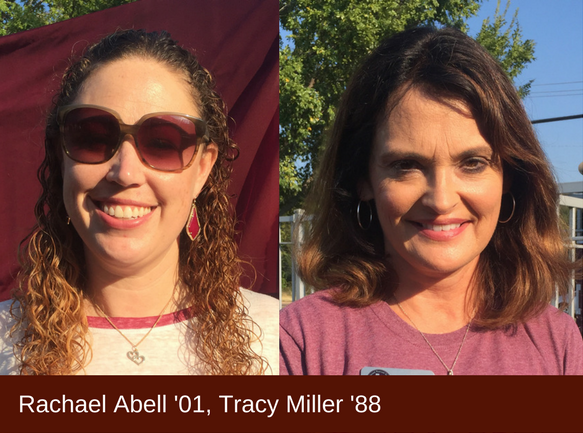 The Aggie connections are strong wherever you are, though.

Abell recalls that soon after she moved to Palo Alto, she was out shopping, driving her car with its Association Century Club sticker and Florida plates. She came out of a store to spot a paper on her car and thought surely it was a ticket. “Instead, it said ‘Whoop! Class of ‘03 and ‘97!”