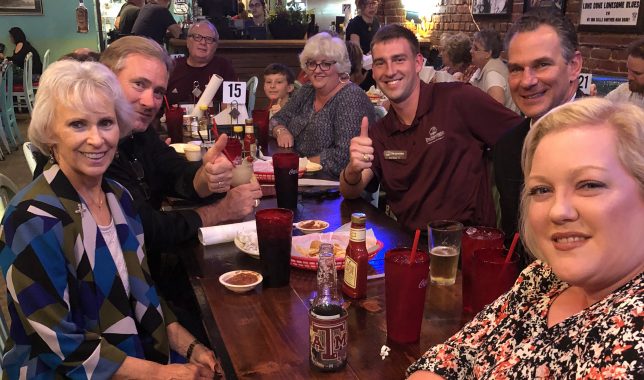 The Southwest Louisiana A&M Club covers a six-parish area, from Cameron on the coast up to Leesville, and connects Aggies in the area with decades of tradition.

Chris Gibbons ‘80 says the Club gets all ages at its occasional events, and Aggies bring their kids. “There’s some new folks every time.” We met with them Oct. 10 for dinner in downtown Lake Charles, La., as part of The Association’s Clubs Coast to Coast tour.

The Club’s annual Muster, held at George Vincent ’57’s ranch, is a longstanding tradition and their largest event, typically bringing together 40 to 70 Aggies for a ranch-hand cookout with barbecued chicken and fixings.

Marianne Petersen White ‘80 has been attending Club events for many years and says rather than meeting frequently, the Club gets together when needed: “Whenever there’s a call, people will pitch in.”

The Singing Cadets come through and give concerts — she’s hosted some of the students at her house — and an Aggie who owns a local Chick-Fil-A donates lunches for all the singers.

Grant Bush ’01, who served as president for 13 years until handing off the baton recently, says that in 2015 they hosted the “Walking Aggie,” John Ball ’78, who trekked across the U.S. raising money for an Aggie Ring Scholarship and staying with kind hosts, including many Aggies, along the way.

When Texas A&M at Galveston’s training ship the General Rudder docked at Lake Charles in 2012, the Club put on an event that included dinner for the crew and others plus a concert by a country singer, and was attended by state lawmakers and city officials, Bush says.

“That was a nice little get-together.”