“This is my first interaction with the Club, but I wasn’t worried about showing up here and feeling like an outsider,’ says Shannon Abbott ’18, an Albuquerque native and current student at A&M’s Bush School. Sure enough, she was greeted by a couple dozen Ags spanning 5 decades, from the Class of ’60 to new grads. 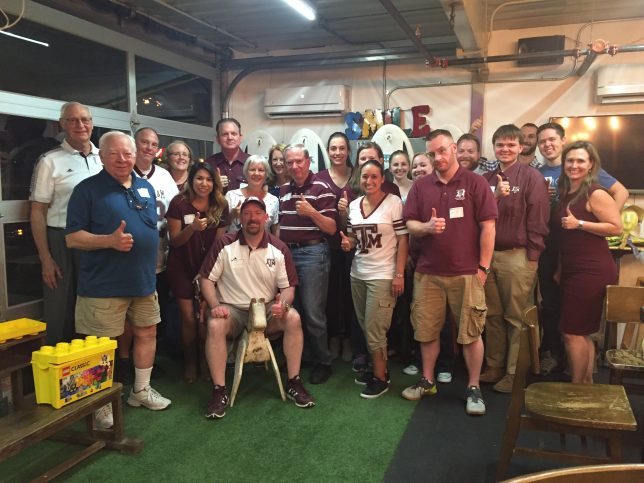 Association staffers met Sept. 6 for dinner with the Albuquerque A&M Club, a group that is getting revitalized, brainstorming new events and would love you to volunteer and be a host or point of contact for game watch parties or other get-togethers.

“Send me your ideas; I’m open to anything,” says Lauryn Hoch ’15; she says the Club also needs volunteers for officer positions. A ski trip, a Christmas party and other ideas have been suggested; chime in on the group’s Facebook page. They’re building a relationship with a local sports bar and hope to host regular game-watch events there.

The Club has a quarter-century of history in the Albuquerque area. Chrisma Jackson ’95, who regularly attends the watch parties, says, “There’s quite a few Aggies here, especially engineers because of tech and the Labs” (Sandia National Labs).

Though it’s close to Texas — in fact, so many Aggies spend the holidays there that the Club is considering “Adopt-An-Ag” for Thanksgiving for those who aren’t traveling to Texas — there are key differences. Like chile.

“You go from queso to green chile here,” Chrisma says. “It’s green chile season right now, so if you go by any grocery store, they’ll be roasting them.”

Compared to Tex-Mex, they say, New Mexican food has less meat and features both green and red chile.

“Red is more of a sauce. Green chile can be chopped or in a sauce,” Shannon says. “Neither one of them is the same as chili with an i. You could get both if you wanted — that’s called Christmas.”

And green chile goes with everything. “You can literally put it on anything you can imagine. People put it on desserts,” Shannon says.

During dinner, Lauryn made some announcements, called for volunteers and gave some explanations about the newsletter she had just sent out.

“If your AggieNetwork profile does not say Albuquerque, you probably did not get this email,” she told the crowd. (You can update your physical address and email address at AggieNetwork.com/profile; then, whenever you move, The Association will send you news on Aggie events in the area, including Muster. Some 93 percent of Aggies live inside the geographic boundaries of an A&M Club!)

Lauryn, who “drives satellites” for a living, was active with the Maryland A&M Club before moving recently to Albuquerque.

“It’s really awesome having an active Club nearby, especially when you’re new to the area,” she says.