Social media is vital for many A&M Clubs, and the Dallas A&M Club has over a thousand followers on Instagram. So we asked for tips!

Priscilla Castro ’08, who does social media for the Club, says that on Instagram, “What works is posting more often, because then you come up in their feeds. We make sure we post for everything.”

For a happy hour, for example, she will post once when the event is announced; then a week before; and then a wrapup afterwards thanking Aggies for attending and showing some of the smiling Ags who came out. Check out examples at @dallasags:

“The more someone likes your photos, the more often you will come up on their Instagram feed.”

Also, she said, “we repost a lot of people’s posts, and we ask them to tag us, so that their friends see us.”

To keep the posts flowing, Castro (who’s also the co-chair of the Club’s annual Crawfish Boil) tracks A&M, The Association and others on Instagram. “If I don’t have anything to say, I repost something good from one of the A&M accounts.”

Much as the Club benefits from Castro’s strength in this regard, others lend their talents where needed.

Henry Talamantes ’07, the Club’s fundraising chair, says, “I just kind of made up the position because that’s where I thought I could be of the most use.”

He uses his professional skills to coordinate how the Club finds and contacts sponsors. “Every event needs sponsors, and I’m kind of the information holder.” As a central repository of sorts, he can connect the event chairs and help them find sources when they need donations. 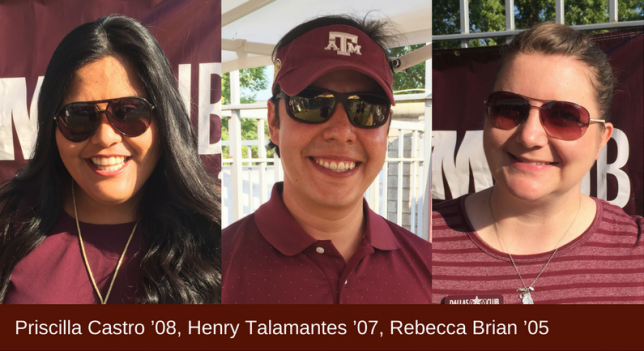 “You have to earn the snazzy nametag,” says Club president Rebecca Brian ’05. “You have to volunteer to be an event chair, and then we’ll buy you a nametag.”

All the efforts are producing great results: The Dallas A&M Club gave out 18 scholarships this year, each for $5,000 payable over two years. “This year we interviewed 29 kids out of about 2,800 applicants,” Brian said.

The Club’s four big annual events are Muster, Coach’s Night, Crawfish Boil and the golf tournament held jointly with the Fort Worth/Tarrant A&M Club to raise some of that scholarship money. Monthly events include a happy hour, business lunch and a breakfast called Aggie Round Table. There are also football game-watches and quarterly pub crawls.

Other events pop up, like a Kendra Scott jewelry night and a night out at the Frisco Rough Riders minor-league ballpark, or Aggie Night at a Texas Rangers game.

And a longstanding tradition is the Club’s “Friday lunch” — so beloved by some longtime members that they get together for lunch on Mondays, too.