Yell leaders on way to LA, Harvey aid on way to Texas 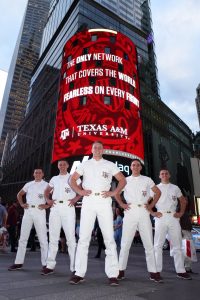 The Aggie yell leaders were in New York this morning for television appearances (watch them discuss the impact of Hurricane Harvey on Fox and Friends and ESPN SportsCenter). They are now on their way to Los Angeles, where they’ll join The Association of Former Students and the Southern California A&M Club to hold Midnight Yell Practice in the Old Town Pasadena district of Pasadena, Calif.

The Association will livestream Midnight Yell Practice at facebook.com/AggieNetwork (remember, midnight in California will be 2 a.m. Central).

Right about now, the Fightin’ Texas Aggie Band is getting ready to march in a Disneyland parade; check the #AggieNetworkMagic hashtag for posts from their trip, for which The Association is helping pay costs.

In a few hours, Aggies will begin gathering in Old Town Pasadena. Aggie HQ is the Blind Donkey, 53 E. Union St., with overflow at Der Wolfskopf, 72 N. Fair Oaks Ave. The Southern California A&M Club has lined up a great number of Aggie food and drink specials at bars and restaurants in the area; click here to view those.

Midnight Yell Practice will be held on the south end of a short street called Big Bang Theory Way (named for the TV show set in Pasadena); click here for map.

The Association hosts all away-game Midnight Yell Practices in partnership with local A&M Clubs, as well as the gameday All-Aggie Tailgates, which have free food and drinks thanks to sponsors including Aggieland Outfitters.

For details on Sunday’s free All-Aggie Tailgate, visit tx.ag/awaygames. Details are also there about a public rehearsal the Aggie Band will hold before the game at South pasadena High School.

Sunday’s game is a fundraiser for Harvey relief thanks to UCLA athletics; read more here. Both teams will wear Harvey awareness helmet stickers. The Southern California A&M Club is selling shirts at Midnight Yell and the tailgate to benefit Harvey relief.